RESPECT AND KINDNESS AT HOME IN THE VILLAGE OF ERIN MEADOWS

Elizabeth and Ross have found a level of comfort they enjoy in The Village of Erin Meadows, in part because of the wonderful team that works there. 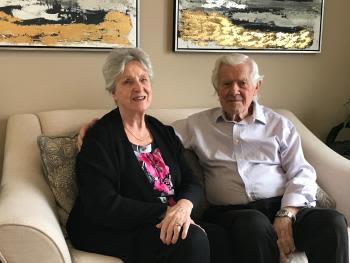 Ross and Elizabeth Skippon carry with them the meticulous sense of organization that comes with decades of experience in business. Together they ran a successful medical supply company and, until recently, Ross continued to support the business from the financial side when his son took over, though Ross is now into his 90s.

Elizabeth and Ross have found a level of comfort they
enjoy in The Village of Erin Meadows, in part
because of the wonderful team that works there.

They brought the same attention to detail they honed in business to their search for a retirement home in the Mississauga area. The condo they were living in began to seem too large and their minds turned to the possibility that they may require the added security of knowing that if their healthcare needs were to change, they’d be living in a place that could meet them.

Schlegel Villages and The Village of Erin Meadows was one of the first places Elizabeth landed upon when she began her online research, but it would be nearly a year before they made the final choice. There were other locations in the area that were intriguing, but the Skippons kept returning to the idea that the suites at Erin Meadows offered the space they desired, the full continuum of care is available if their health needs change, and the team simply treated them with a level of kindness they greatly appreciated.

“It’s a huge community feeling,” Elizabeth says, considering the team members they first connected with when they began touring. “The thing I like about them is, they’re respectful. Some of the places that we went to visit were treating us like we were children. It really bothered me,” she says.

It’s a mistake many younger adults sometimes make, speaking to older adults with language that can unintentionally feel demeaning. “Hi, Sweetie,” someone might say to an older woman, for example, or they may refer to an older gentleman as “cute.” For two people who’ve led a vast life of interest, raised a close family and ran a successful business, being treated with true respect stood out for Ross and Elizabeth when they toured Erin Meadows.

They moved in during the fall of 2019 and haven’t looked back.

“With our age, and particularly my age,” Ross says “the important thing we learned, and we did it right away, was to move in here before you have to. So many people wait and wait and procrastinate and then (a health change) happens then it’s just a terrible, terrible thing to go through.”

“We were very thankful that we looked ahead far enough to anticipate that this is where we should be.”

In many ways, it continues to be the people that make the difference, Ross and Elizabeth agree. The Village team managed to open a new retirement building just before a pandemic struck and Ross says he’s been very impressed with all they have done to support the residents during the past 16 months.

“We’ve learned a lot about how to live with COVID and the staff here and the senior people, they’ve come through a difficult time and they’ve corrected where they had to make corrections,” Ross says, and Elizabeth nods in agreement. “They have the nicest people that people of our age can enjoy. They’re always cheerful, they have vibrant energy and they’re fun.

“Everywhere we go people know us and we know them and it gives you a nice comfort level.”

Contact Christina Beamish at The Village of Erin Meadows