Doesn't it seem female Halloween costumes have devolved into overt sexiness? Even young girls are donning witch costumes cut up to here and down to there. But such outfits just feel unseemly for Baby Boomers rapidly approaching retirement age. Nor are guys exempt from the age-inappropriate costuming. Too many go the slovenly or uncostume route, entirely missing the point of the revelries.

Still, we're the generation that invented celebrating Halloween long past the trick-or-treat years. Hippie and 1960s Carnabie Street styles were really the first form of Baby Boomer costuming and -- let's be honest -- we started partying pretty rather early, too.

Even if you disdain the more youthful approach, there are still plenty of opportunities that suit our, ahem, dignity while continuing the Halloween spirit.

Here's a selection of 13 ideas for men, women and couples.

Muammar Gaddafi
Rule the night as the infamous African dictator. To pull this one off, you'll need a black curly wig, red fez, checked scarf, and homemade T-shirt emblazoned with "I Love Libya." If you're going with a gang, add a few Nigerian soldiers to do your bidding throughout the evening. You also might want to carry a journal filled with love notes to Condoleeza Rice and several photos of the former Secretary of State.
Zach Galifianakis in Hangover II
Remember the grizzly look Zach wore in the sequel to this huge comedic hit? A fake beard and a bald head or bathing cap are all you'll need to recreate Mr. Alan Garner. Ladies will love rubbing your bald pate or running their fingers through your manly fur.

Hangover II - Part II
If you're dressing as Zach and going with a buddy, he'll need to create a Mayan face tattoo then add wire rim glasses and stodgy clothes to give him the unique style of Ed Helms as Stu Price. The last member of your wolf pack need only wear khakis, a white dress shirt and look dashingly handsome.

Harold Camping
Harold Camping predicted the world would end in 1994. Welllllll...not so much. He again foretold the End Times would happen May 21, 2011. Didn't happen, did it? Halloween seems a perfect time for the puffed-up preacher to take another shot, so don your fluffy sideburns, powdered white wig, sports jacket and a fat book to thump as you preach to all within range.

Charlie Sheen
This one is so obvious it's painful, but it would be remiss to omit the king of "Winning!" You could create your own outfit or go whole hog with a mask, wig and "Winning" hat from BuyCostumes.com. Bring your price down to Halloween affordable by using codes from FreeShipping.org. 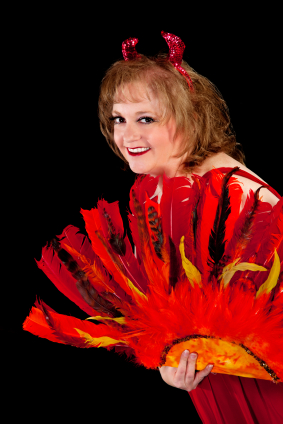 Mummy
Now there's a double entendre just waiting to happen. If you're still shuttling kids to soccer and band practice, take on the dual role of a mommy mummy. Pick up some high-waisted mom jeans at Goodwill, along with an appliqued shirt or sweater (we're assuming such things aren't in your closet). Wrap yourself in toilet paper and carry a soccer ball.

Babe Lincoln, Vampire Hunter
The movie "Abe Lincoln, Vampire Hunter" is coming out in 2012, but ladies can come out this Halloween, dressed as the president who freed the slaves and, apparently, slew the blood suckers. You'll need a stovepipe hat made from construction paper, a formal black coat, fake beard and a short skirt with high heels. Carry a bloodied stake and you're good to go.

Bridesmaids
Here's the female counterpart to the all-male "Hangover" costumes. The wild chicks of Judd Apatow's summer comedy are easy to replicate with thrift store bridesmaids' costumes, preferably in Pepto Bismal pink, and a meringue-pie wedding gown with a matching pink ribbon for a waistband.

Elizabeth Bennett, Zombie-style
The oddly popular "Pride and Prejudice and Zombies" novel offers a grisly twist to a period costume. Pick up a long, empire-waist dress at a thrift store or create your own using a puff-sleeved tee shirt and floor-length skirt. Arrange your hair into a conservative bun, then have fun disheveling the entire look with random blood spatter and zombie makeup.

Prince Charles and Camilla
Forget Prince William and his new blushing bride. You can play the passed-over prince and his consort for just $2.01 each with masks from Discount Costumes. Want to feel more powerful? Try the Queen Elizabeth mask for a discounted $1.26. (Shipping and handling are $5.95, but that's still a great deal.)

Jack and Jill
Take two T-shirts. Write "Jack" on one and "Jill" on the other. Create a broken crown for Jack out of posterboard and add fake blood, then create bruises on Jill with black-and-blue face paints to indicate her role as "She who came tumbling after." Make sure you both carry pails of water and trip occasionally.

A Pair of Blue Jeans
Baaaaad puns are totally allowable on Halloween, so this one is perfect. Both of you wear blue clothes. His nametag reads "Gene" and hers says "Jean." To go whole hog, add blue skin paint.

Baby Boomers (of course)
If you don't mind wearing diapers and showing your age, you could be the talk of the party. The costume requires a box of Depends, and a baby-doll top. You might use scrub tops covered in duckies or another childish pattern then add a big bow around the neck. Props might include giant baby/water bottles and your social security cards.

Get your free eBook
Supplementing your Retirement Income