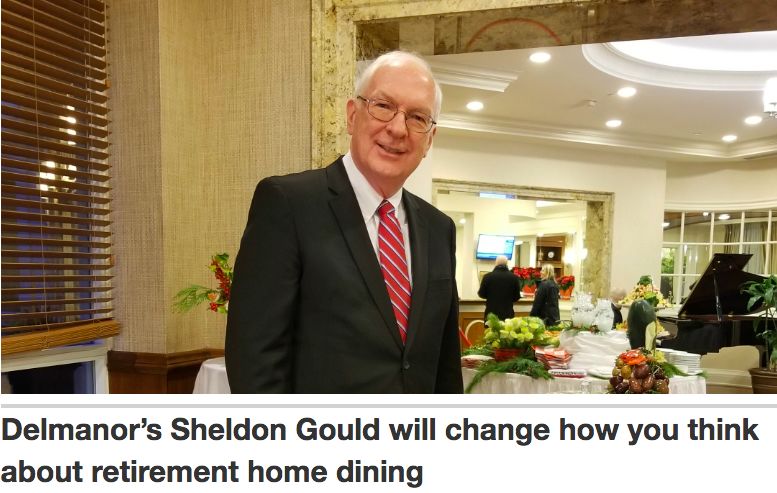 Sheldon Gould would probably forgive you if you think the food in retirement communities is boring, bland, or just plain bad. It’s not that it’s well-deserved — it isn’t — it’s just all too common, so he’s used to it. Gould is the COO of Delmanor, a community of retirement residences in the Greater Toronto Area, and reckoning with people’s preconceptions of what his chefs prepare is just part of the job. So if you’re touring one of these facilities and show up expecting the worst, his team will take it upon itself to prove you wrong.

“We do everything from scratch. We have Red Seal chefs in our kitchen,” says Gould, referring to the Canada-wide trade certification program. “We do kitchen tours quite often if we get a sense there’s that perception.”

While Gould oversees operations generally for Delmanor, his focus on delivering a top-tier culinary program to Delmanor’s five communities is a product of a long career in food service. After graduating from the Ryerson Institute of Technology, now Ryerson University, in hospitality and tourism, Gould took a job with Canadian Pacific Hotels, the predecessor to Fairmont Hotels, and spent much of the ’70s jumping from property to property across Canada. Gould moved into chain restaurants, first with the company that developed the now-ubiquitous Earls concept, then later with The Keg Group. Then, in the early ’90s and with a young family in tow, Gould made the jump into retirement communities. Somehow, very little changed.

“It’s still very much a continuation of the hotel business,” says Gould. “I remember a friend asking me after I’d been the retirement business for a few months if I missed the restaurant business, and I said, ‘Well, it’s a different business, but I’m still serving 750 meals per day.’ So all those components are still there.” Gould was still in hospitality; it just went by another name.

Gould even grew up on a working farm in Renfrew, a small town about 100 kilometers west of Ottawa in rural Ontario. His life, one way or the other, has revolved around foodservice, which is especially important for retirement communities because the retirement sector is growing by leaps and bounds, and the generation driving that surge is increasingly paying attention to what they eat.

Canadian Boomers, those born between 1946 and 1965, are now retiring in droves. According to Statistics Canada, the number of adults who aged past the 65-year mark jumped by 20 percent between 2011 and 2016. In 2016, for the first time in Canadian history, they outnumbered children up to 14 years of age, and the demographic shift driving those jaw-dropping statistics is still closer to the beginning than the end. The earliest Boomers reached retirement age in 2011, which means the generation still has 12 years of retiring in front of it. And as a group, a 2011 study by the NPD Group, a food service consulting firm, found that 72 percent of seniors said nutrition is important when planning a meal, and they seem unwilling to accept a substandard fare.

Jordan Bruce, the chef at Delmanor, recalled a trifle he had been making for years with zero complaints from guests. Then came to Adelaide.

“She almost rang my neck,” says Bruce. The problem, Adelaide vocally let him know, was the lack of rum, so Bruce acceded to her request and added rum to the next one. “It was a huge hit across the community. Now the menu says Adelaide’s trifle. She has a little swagger in her step.”

Other Delmanor chefs have similar experiences. One chef got pointers on her butter chicken, while another received a recipe for goulash from one of his guests. Many residents formally contribute to menu planning, while others grow vegetables on site that go into various dishes. The chefs are encouraged to act on their residents’ tastes and preferences, which vary from community to community. The residents have lifetimes of cooking and eating behind them. They know what good food is, and they expect it at home. Letting the quality of it deteriorate could spell disaster for the brand, just like it could for any restaurant.

“I’ve attended a lot of residents’ meetings where the bulk of the meeting was, ‘the soup’s too salty.'” Meanwhile, someone else observes that there isn’t enough salt in it, and that goes back and forth for the whole meeting,” says Gould, recalling his handful of decades in the industry. By contrast, Gould says food is rarely brought up at Delmanor residents’ meetings, which is important not just for the residents, but for the Delmanor brand.

“I’ve run properties in the past that had very solid culinary programs,” says Gould. “But once the perception is there that they have food issues, it’s a very tough thing to turn around.”

Hence, attracting Red Seal talent with hotel and restaurant experience, the focus on fresh, local ingredients, seasonal menus and not just white-linen service, but in-house pubs serving comfort food, too. Popular food culture isn’t limited to Millennials and Gen-Zers snapping photos of brunch. It’s intergenerational, and for retirement communities that do it well and adapt to residents’ preferences and culinary wisdom, it’s a competitive edge. Constantly improving the culinary program isn’t just a feature of the brand; it’s a core component of its growth and sustainability.

Managing that growth is at the heart of Gould’s work and altogether not very different than his role in first jobs hospitality and foodservice. Only now, if Gould or his team slips up, it’s not one-off bad night. It’s confirmation of the ill-conceived notion that the food in retirement communities is no good. It’s why Gould has already started building the culinary team for Delmanor’s next residence in Aurora, which starts construction in February.

“We really focus on trying to bring our people up from inside the company,” says Gould. “By the time we open, we’ll have more Red Seal chefs that know our product, know our brand, and are able to move into the new communities.”

Gould wants the new team up to his standard, which at this point, is justifiably high.