Couple still holds hands down the hallway after 70 years of marriage. 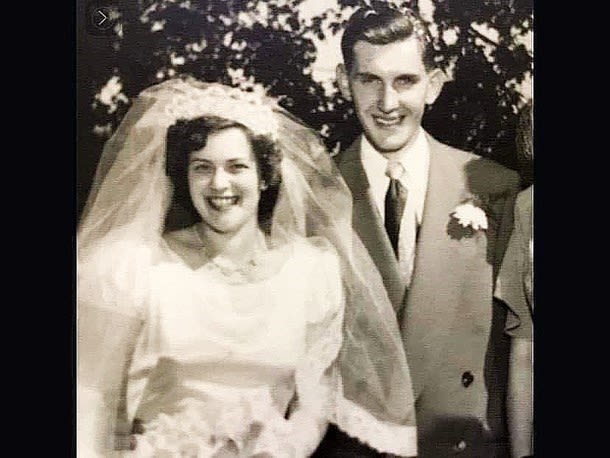 Marie and Howard Tizzard celebrate their 70th wedding anniversary at The Elden of Bradford on August 12, 2020.

The Tizzards met in school at the young ages of 13 and 14. After high school, they got married in Toronto in 1950.  A time when the average cost of a house was around $8,500 and the cost of gas was just 18 cents a gallon. The family income was approximately $3,300 a year, and milk was still being delivered to the doorstep.

“Howard acts younger than his age,” jokes Courtney Tizzard, one of their grandkids, noting that her grandfather is 92 but acts like he’s in his 60’s. “He is still sharp-minded!”

The couple currently reside at The Elden of Bradford where they share an apartment together.

“They love being there,” shares Courtney. “They enjoy living at the Elden because it’s like living on a high-end cruise ship; they have everything they need there.”

The residence offers many on-site amenities such as dining rooms, a gym, hair salon, activity rooms, doctor’s office, and a garden room where they can grow their own vegetables as a community.

Before the pandemic hit, Howard was still visiting his farm where he and his family harvested many vegetables such as potatoes, carrots, and squash, and was the winner of many ribbons at the Royal Winter Fair in the past.

“Howard likes to leave and do his own thing,” explains Courtney. “So being unable to visit the farm, it has been hard on him.”

Marie prefers to stay in and enjoys cards with the ladies.

“My grandfather still looks at [Marie] the same way he did years ago – he absolutely adores her!” shares Courtney.

During COVID, the couple have been able to have a socially-distanced visit from the front porch with one of their sons and daughter.

Courtney shared the news of Howard and Marie’s upcoming 70th wedding anniversary on Facebook’s Welcome to Bradford page and asked the community to send cards to the happy couple. They were overwhelmed with over 200 comments congratulating the couple and wishing them both well.

“At this day in age it's very unheard of!” exclaims Courtney, noting the longevity of her grandparent’s marriage is rare.

Marie and Howard shared their secret to a long-lasting love:

“The main thing is we listen to each other and don’t take things out on the other person. You have to know when to bite your tongue and let go. You have to have open communication and hear each other out because what you say is important. You need to give and take”.

The Elden of Bradford a retirement community located in Bradford, Ontario. Learn more

Request Information: The Elden of Bradford