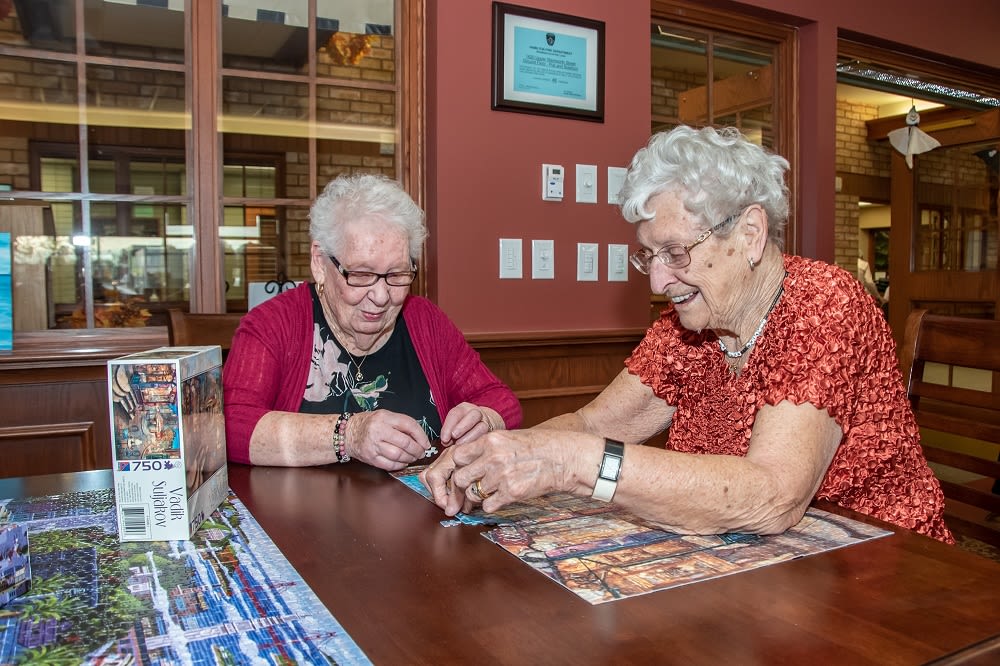 Anne Whittle and Ruth Chasty sit together in the lounge off Main Street in The Village Wentworth Heights. Other tables are filled with fellow residents, some sipping pints of beer or steaming mugs of coffee while others clink glasses of white wine. As the two friends chat, another resident sits upon the bench before the piano and her fingers begin to dance rhythmically along the keys.

They’re all models today, helping out with a photo shoot throughout The Village, yet both Anne and Ruth agree that the energy felt at this moment is pretty typical of any day – there’s always something happening and a bit of a buzz throughout the place.

They soon begin talking about their history in the Hamilton Area, Anne’s after she arrived from England to join her new husband Bert in a house atop the Mountain and Ruth’s, which began after her family moved from Lakeport, a little farther east along the northern shore of Lake Ontario. She and her husband eventually settled in Stoney Creek at a time when The Mountain and The Countryside around Hamilton was entirely rural. The two friends have fond memories of their time in those early days and they’re happy to reminisce.

Ruth first noticed Wentworth Heights when she looked into the possibility of her husband moving into the long-term care neighbourhoods, which is when she learned that the new retirement suites would be opening in 2016. Sadly, he passed away before the new suites opened, but Ruth still made the move, and she’s thankful she did.

“There’s always something to do between things like the exercise classes and the games,” Ruth
says, and then there’s the social times when neighbours simply get together to share time and their memories.

“It was the best thing I ever did, moving in here,” Anne says. “When I was at home my television was on 24/7 just for company. Now I don’t need it. Every time I come out my door there’s somebody there, I play games all day long.”

She has regular people to play cards with, she says, or the 3-diminesional version of scrabble known as Upwards, and she’s always out in the community, either connecting with friends at the local seniors centre or swimming. She’s out more than she’s in, it seems, but when she’s in she isn’t lonely, and that’s why Wentworth Heights was such a good move for her spirit.

There are always new people to meet and they both have friends who are eagerly awaiting the opportunity to make The Village their community, an extension almost of what Hamilton and area was when they first settled here decades ago.

“It’s just so pleasant to be here,” Anne says as Ruth finishes her sentence with a few simple words: “It just feels like home.”

Contact Branka Urosevic at The Village of Wentworth Heights