Let’s celebrate seniors' month* with a look at how the pandemic has brought out the best in older Canadians. In retirement homes across the country, seniors have shown resilience in pursuing personal dreams, found new ways to give back, or simply achieved remarkable results through ingenuity, passion, and perseverance.

Here's a look at seven inspiring seniors from inside Canada's retirement homes.

Retirement homes offer opportunity and space for people to pursue passions they have often set aside while raising kids and a family, paying a mortgage, and living life. Here are two recent stories highlighting seniors who’ve explored passions anew, with results that were indeed newsworthy.

After writing songs her entire life, Vera Coupal, 95, living in memory care at Riverbend Crossing by Esprit Lifestyles in Regina, finally heard her dream come true, when a song she wrote in her childhood was played on CBC Radio this past month.

Vera had been playing the piano and writing music since she was young, and over the years she’d amassed a book full of original music that she still has today. Her favourite always was a tribute to Canada called, "The Canadian Way."

Her story is typical of so many seniors who saw life get in the way of her youthful dreams. She enlisted at 17 (1943), met the love of her life in the Navy, then married and returned to Saskatchewan to raise her family. Still an avid musician, her children recall growing up listening to their mom play the piano and entertain with other original works. Through it all, though, it remained “a lingering dream” to become a published musician.

For many years, right through 2020, she shared with people that she wanted “to find a producer” but she didn’t think anyone would “take interest.” However, Martha, a Memory Care Coordinator at Riverbend Crossing heard about her wish and thought “We can do this!” She contacted local musician Ryan Hicks, who set up recording equipment in Riverbend Crossing so that she could record her song right in her home. 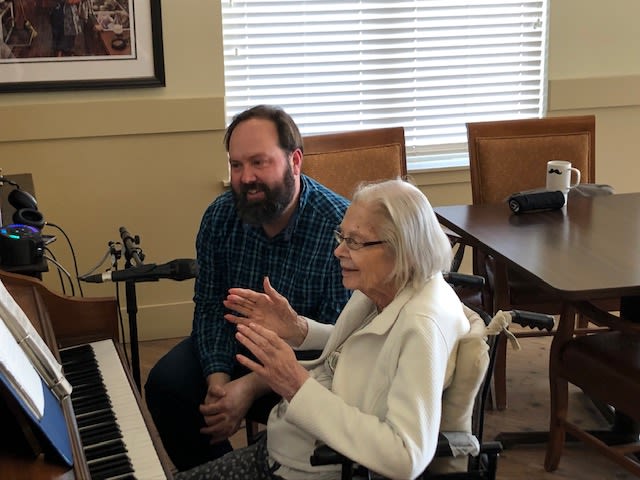 Staff also contacted the CBC Morning Edition in hopes that they would agree to play the song, and soon after, Vera listened to the long-awaited release of “her first single.” She was later interviewed by CBC National News and started to receive fan mail and gifts from listeners across Canada.

The story stands as a wonderful testament to the above-and-beyond care available in communities like Riverbend Crossing, a memory care environment specializing in caring for those living with Alzheimer’s, dementia, or other forms of cognitive impairment. Like many of the country’s best memory care communities, Riverbend Crossing focuses on the person, not the illness.

Hearing her song on the radio, “brought tears to my eyes,” Vera acknowledges. “I couldn’t believe it.” The message for her, as she readily shared with CBC listeners, was positive and poignant:

Watch the CBC report on YouTube, or listen to the original CBC Radio episode.

Schlegel Villages’ Stories from the Green Bench videos and podcast (#ElderWisdom) is a wonderful collection of and tribute to the wisdom of the Villages’ seniors. Their most recent episode (June 8) features Patricia and Dennis Bayley, who continue to explore their passions at The Village of Taunton Mills. The couple’s interests include sculpture, painting, drawing, and—something Patricia particularly excels at—poetry.

“As long as I could print, I’ve written something,” she says. “It begins with inspiration and ends with perspiration. I enjoy it though. I enjoy putting words together, and I enjoy rhyming for its discipline. I enjoy sharing a theme that people can relate to.”

At The Village of Taunton Mills, she started a poetry group with like-minded friends Pauline Reid and Myrla Sanderson, where (pre-COVID) they would share poetry and each other’s company. While the group has taken a break in the pandemic, Patricia has continued to write poems. On the podcast, she shared her latest, the pandemic-themed “Hope” (“a beacon in the dark” when “the world is wounded”).

In April of last year, Patricia found herself on a national stage during the outbreak’s deepest uncertainty. “Stay the Course,” a tribute to the front line workers risking their lives, was hand-picked by Lisa Laflamme to close out the CTV National News. The video of Patricia’s reading is below.

Green Bench podcast host Erin Davis calls the Bayleys “The most entertaining couple we’ve met.” In spite of quarantine, they’ve been enduringly hopeful. Dennis dislikes how the pandemic’s kept him away from his “greatest passion, people.” He looks forward to renewing charitable work providing clothing for children in indigenous communities.

You can view all podcasts here: https://elderwisdom.ca/

The charitable spirit is spreading

Generosity has been studied in increasing depth in recent years. Summer Allen, writing for the Greater Good Science Centre (GGSC) has chronicled its many benefits in her paper “The Science of Generosity.” “Simple acts of giving and helping” are increasingly now proven to have benefits for the giver, she writes. It’s an important contributing factor to healthy living and healthy aging.  Allen also outlines growing evidence that “humans are biologically wired for generosity,” as it activates reward pathways in the mind. And social settings like retirement communities are ideal breeding grounds for generosity.

In May of last year, George Markow, 99, of The Roxborough Retirement Residence set out to walk 100 kilometers, with a goal of raising $100,000 for COVID-19 research. He lapped the courtyard of the Newmarket retirement home with the aid of only his rollator.

humans are biologically wired for generosity

George reached his goal in September, well ahead of his 100th birthday, in May. That was 15,000 laps around the courtyard! So far, George has raised over $70,000. (You can help him reach his goal by going to his GoFundMe page.)

George was one of several centenarians who took up walking (rollating) for charitable causes during the pandemic. John Hillman, 101, completed 101 laps around his Oak Bay retirement home last May, raising more than his goal of $100,000 for Save the Children Canada. In June, Invermere BC’s Jim Ashworth, also 101, walked 101 blocks for the local food bank. All were inspired by Tom Moore of the UK, who raised more than £33 million ($57 million CA) for Britain’s National Health Service by walking laps of his garden. Moore, also 101, was later knighted.

George likely speaks for all of these charitable seniors when he states his simple motivation: “I want to do something positive,” as he told Global News. Elsewhere, he adds, “I feel obligated to do something about [COVID-19]. I’m happy to be alive still after all I’ve been through.”  Read more about George's accomplishment on the Verve Senior Living blog.

Dorothy Warnock, knitting for a cause

Similar to George Markow, Dorothy Warnock felt a compulsion to reach outward during the pandemic. A lifelong knitter dealing with declining eyesight, she says, “The only thing I have left is my hands. And I thought, what can I do to help humanity?” The resident of Governor’s Walk in Ottawa had learned early in life that gifting people with her knitting made them happy, in turn making her happy. Throughout her life, she’s sought out ways to benefit those less fortunate.

“I had nothing but an idea: let’s make some hats,” she says. Through friends, she learned of a  local charity, Cornerstone Housing for Women. Cornerstone provides emergency shelter and safe, affordable permanent housing for women, in Ottawa. The Governor’s Walk community and its members rallied behind her paying for shipping and helping her to sell.

The story was featured on the local CTV station, which Dorothy hopes will help her reach her goal. Items range from a $15 baby hat to a $30 bundle of adult hat and scarf. You’re invited to email [email protected] to place an order.

Learn more about Dorothy and this project in the post from MettaLifestyles.

Another story of knitting for charity can be found in Evanston Summit in Calgary. Residents got together to knit two bags of items to donate to the Calgary Drop-in Centre, dropping in an additional $500 from their resident fund. As with the story above, the centre provides emergency shelter and care to the homeless. You can find the full story on our blog

Inventive and entrepreneurial at any age

Finally, we highlight how retirement home seniors exhibited good old fashioned perseverance and work ethic, by inventing new and useful things during the pandemic or simply enduring in business and life.

Last year in early summer, Ingrid, whose daughter works on the front line in a hospital, realized a small but fussy need she might be able to help with. Combining her passion for crocheting with a desire to help, the Delmanor Northtown senior invented something new—and necessary—The Ear Saver! With front line care workers wearing masks all day, often for as long as 16 hours, the discomfort and irritation only added to the stress they faced. With its simple construction and comfortable fit, The Ear Saver offered instant relief. Her invention can be seen below, or you can read the Delmanor blog post.

Like others above, Fay Kuzmar of The Lodge at Valley Ridge (Calgary) joined the growing ranks of centenarian Canadians**, turning 100 in December, and still making a difference. “I have a purpose!" she says proudly. Fay was one of the original Mary Kay sales people, and remarkably, she still keeps customers.

She also still regularly attends exercise classes, among other things. As daughter Joyce de Nance adds, “She can crossword faster than I can, she plays Wii bowling [and] she paints.”  Like others above, she “loves doing handwork” finding it “fulfilling.”

“She’s so very active,” says Joyce. “That’s the key to being a healthy senior.”

Despite her admission that “closing a sale was the hardest thing to do,” she made a career out of Mary Kay and even met the founder on one occasion. Some of her clients are now grandmothers, but “they still come every once in a while and restock.”

Turning 100 is an accomplishment in itself but Fay's passion seems unstoppable. See her story carried by Global News, or watch the report below.

Like Vera and Dorothy, Dave from Dr. Lloyd Hemstock & Hearthstone Place (Lloydminster) developed a passion at a very early age. At the age of four, he fell in love with woodworking and made things out of wood throughout his life. If there was something that Dave needed, instead of purchasing it, he would build it, including a turned log cabin that served as a family getaway for many years.

2019 was a difficult year for Dave, when he became a widower and soon after, lost his sight. With the help of his daughter, Dave resolutely gave up his independent life and moved into Dr Hemstock Residence. He realized, though, that his new home could be a place to renew his love for building.

He set up a shop in his room and began working with wood again, building birdhouses, despite his blindness. Friends have helped get him started and staff has encouraged his hobby. He plans to sell his birdhouses and donate funds to the CNIB.

*Ontario, Newfoundland and Labrador, New Brunswick, Prince Edward Island and Nunavut all celebrate Seniors' Month in June. In the provinces of British Columbia, Alberta, Nova Scotia and the Northwest Territories this past week was devoted to seniors.